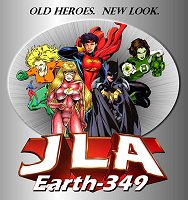 Okay, here's something a little different. Here we have a series of stories written by Anton Psychopoulos, Ph.D. (a.k.a. "Dr. Psycho"), inspired by the story from Superman #349 in which Mr. Mxyzptlk imprisons Superman on an alternate Earth where everyone is of the opposite gender. This parallel world was never given a name in the comic, but in honor of the issue number (and no doubt with a nod to the old Earth-2 stories in the Silver Age DC comics), the good Doctor has christened this version "Earth-349."

As the disclaimers state, the stories are inspired by the original Superman story, but not limited by it, so you may notice some interesting twists on the heroes in addition to the gender switch. (And for that matter, a few appearances by some Marvel heroes, too.) So if you're heavily into character and story continuity this may not be for you. But if you're intersted in seeing some fun (and occasionally racy) pre-Crisis gender-switched DC heroines, look no further.

While I'm on the subject of giving credit, I also wanted to take the opportunity to recognize Adam Walters for allowing me to use his artwork on a number of these images. The pictures themselves were created by me from by blending artwork from a variety of comics, but Adam's artwork filled in for many "missing" heroines, such as the Atom, the Spectre, the Human Torch and Aquawoman. (I also co-opted the image of the Flash in the JLA image from the work of Jeff Whiting, another terrific artist.)