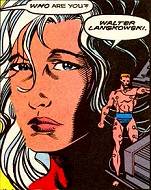 As anyone who reads comics can tell you, death in the comics is hardly ever a permanent condition, as characters come back from the dead with astonishing regularity. However, even in an environment where such things are common, Walter "Sasquatch" Langowski stands out as the poster child for comic book resurrections.

A long-time member of Alpha Flight, Walter was able to transform himself into Sasquatch, one of the "Great Beasts." Unfortunately, this brought him to blows with his female teammate Snowbird, their sworn enemy. They fought, and Walter's body was killed (but not his consciousness). Snowbird died soon thereafter.

Walter's consciousness was transferred to the mechanical body of the Box robot, and later briefly took over the body of the Hulk. He drifted in the void for some time after that, but through an unusual set of circumstances he was able to later possess the mindless body of the villain Smart Alec, which he then used as a vessel to get himself back into the Box robot. In the meantime, however, the villainous Pestilence had re-animated Snowbird's dead body and was using it to attack Alpha Flight in her "Sasquatch" form. Stepping forward, Walter's spirit was able to take over Snowbird's Sasquatch body, and defeat Pestilence. Walter's elation was short-lived, for on changing back to his human form, found himself turned into a woman...the legacy of Snowbird's female body.

Walter took the whole thing pretty well, managing to keep his sense of humor about the whole situation, and taking the name Wanda. He remained as a woman for almost two years before the situation was "corrected" by a new writer, who quickly restored Walter back to his male form.