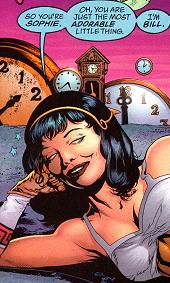 Here's a message for all you fiction writers out there: if you've ever had visions of actually transforming into a brunette superheroine, you may want to consider writing about Promethea.

At least, that's what Alan Moore�the current writer of the heroine�would apparently suggest. In the currently-running Promethea series, the heroine exists as a kind of "living story," where some of the people who have written about the character (or their loved ones) are actually transformed into the heroine. (Which possibly explains why Mr. Moore and Promethea have never been seen in the same place at the same time.

The current Promethea is a young girl named Sophie, but the former incarnations of the character still exist in the Immateria, a realm where imagination rules. One of their number is a man named William Woolcott, who chronicled Promethea's adventures from 1939 through 1969. Called "Bill" by the other Prometheas, this version of the heroine had a Wonder Woman-esque career, up to and including the doting male admirer. Unfortunately, things ended badly for Bill when that selfsame admirer discovered that his "sweetheart" was more than she seemed.

As if that weren't enough (and don't you think it ought to be), there's a second TG character that pops up in the series from time to time. Her name has been given only as "Roger," and she's a super-strong woman who is a member of the "Five Swell Guys" team of heroes. (Yes, I'm serious.) For a while it seemed like "Roger" might have just had an unusual code name, but her behavior, manner of dress, and a couple of cryptic comments about her past suggested otherwise. In fact, it was the Bill Woolcott Promethea that confirmed that Roger used to be a man when they met briefly.

We haven't been given a lot of background on Roger so the details of her transformation are unclear, but the change appears to have occurred about five years earlier during the course of what's referred to as "that Suffragette City episode." (This doesn't seem to be public knowledge, however, since people seem to assume that she's a "new" Roger.) From the hints that have been dropped, the transformation seems to be permanent, but she's obviously not comfortable with her new gender...much to the chagrin of her teammate Bob, who apparently has romantic designs on his transformed friend. 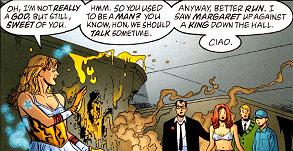