I'm not quite sure why, but if you ask a comics fan to rattle off a bunch of the Justice League members, it seems like everybody always forgets Hawkman. Everyone remembers the big names--Superman, Batman, Wonder Woman, and Aquaman (the old Superfriends cartoon was good for name recognition, at least). Then, you'll get Flash, Green Lantern, the Atom and a host of others. Then you'll start remembering some of the more esoteric heroes--Green Arrow, Zatanna (love those fishnets), Martian Manhunter, and so on. But Hawkman hardly ever makes the list. In many ways, this is something of a disservice to the character, who in one way or another has been around at least as long as the bigger names.

In 1993, there was a slight resurgence in interest for the character, and a new Hawkman comic was released. Written by John Ostrander, the book introduced a new twist on the character by incorporating a strong influence of native American mysticism. It also took on a somewhat darker tone for the hero, although this was perhaps to be expected, since the series started off at a bad point in Hawkman's life--he had just barely surived an encounter which had apparently taken the life of his partner, Shayera Thal (Hawkwoman).

Convinced that she had somehow survived, Hawkman continued to search for his lost love, which caused him to again cross paths with the villainous Count Viper, a man possessing powerful psychic abilities. We soon discover that Hawkwoman did indeed survive, and that the Count has used his powers to switch bodies with her. Trapping her in the body of the old man he formerly inhabited, he then had her committed to a mental institution to keep her out of the way. Using her form to get close to the hero, Count Viper then trades bodies with Hawkman, leaving him trapped in his lover's body. Count Viper then uses Hawkman's form to get close enough to the Justice League to be able to cast his mental thrall over some of their members. Trapped in foreign bodies, Hawkman and Hawkwoman must battle Count Viper and members of the Justice League to defeat the villain. Finally emerging victorious, they then battle Viper on the spirit plane in an attempt to restore their original bodies. 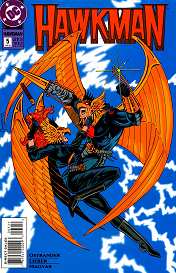