Flare and the Champions 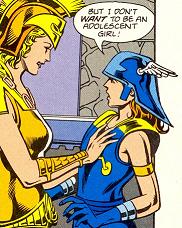 In the mid-eighties, a series of comics were produced that were based on characters taken from the Champions superhero roleplaying game. The initial 6-issue mini-series was published by Eclipse, but later the issues were published under the banner of Hero Comics. A number of spinoffs were created (almost exclusively devoted to the female characters), including the popular Flare comic. Initially, these started off as fairly standard four-color heroic comics, but they quickly started to take on a more adult theme, generally to the detriment of the books.

A TG element appeared throughout these books with some regularity, generally focusing on Flare's shape-shifting brother Philip. Other subplots involved Doctor Arcane taking over the body of the villainess Dark Malice, or the god Hermes being resurrected into the body of the heroine Icicle.

The initial six-issue mini-series contained two major TG subplots. In the first, Doctor Arcane possesses the body of the villainess Dark Malice to unravel a mystery involving three dark gemstones. The second subplot involved the leader of the organization Demon (who was later revealed to be Flare's brother Philip), as he used his shapeshifting abilities to infiltrate the team as Doctor Arcane's granddaughter, Donna Hannah.

Flare and her brother

In the Flare series, we get a little back story on Flare and her shape-shifting brother Philip, who would later go on to become the Demon Master. While still receiving training with their brother and sister, Flare forces Philip to become a girl. To get back at her, Philip later shape shifts into her again to have a romantic tryst with one of the guards, thus getting her in trouble with their teachers. Flare doesn't take long in figuring out Philip's little deception, however.

In another back story, Philip uses a native girl to demonstrate a new trick with his shapeshifting powers.

The gods reborn--Hermes as Icicle

Dark Malice returns, and is revealed to be the Greek goddess Persephone. To recreate the gods of Olympus, she uses the Champions' bodies as vessels for the spirits of the gods. Hermes is brought back as the heroine Icicle, much to his displeasure.

Honorable mention goes to this short sequence from the Champions series where the villainous robot Mechanon captures the Marksman and threatens to put him into a robot duplicate of Rose. Unfortunately for us, he gets saved at the last minute. Curse those interfering heroes!

The Champions comics haven't been published in a few years, but a new bit of material has recently surfaced on the Heroic Publishing website. One of the recurring villains in the series was Foxbat, a costumed loon with a history of annoying the Champions. Apparently the creator of Foxbat has other designs on the character, so Heroic Publishing has decided to have him become "The Flying Fox," instead. Ordinarily this wouldn't be too interesting, but the Flying Fox is actually a part-time super-heroine--the character switches genders between a villainous male and a heroic female.

Right now, the Heroic Publishing site has a page devoted to the Flying Fox, and tells the origin of "her" character. There aren't any pictures of her yet, although there is a contest for submitting entries. There are however a few text pages describing her origin as a heroine, as well as the "untold stories" that set up the transformation, and a few of her early adventures. There is also an e-mail form where you can indicate your support for the character, and vote to say if you want to see the Flying Fox as male, female, or switching between the two.